May 14th, 2015: I'm just an old guy, so what do I know... but it seems to me like YouTube is one of the primary means of allowing people to sample new music. Radio used to fill that role, but the memories I have of new, innovative music on the radio is a distant one. That's why it seems kind of important to produce "videos", even if they're relatively crappy and experimental. My new album is a "full band" recording, though I played all of the parts myself. That means I don't have a "band" to put in a video. How do I get around this? Why, make a video with myself as the band, of course! I shot this entirely myself one night, just goofing around across three sections of a "stage" that I set up in a local studio. A bit of editing and careful cropping, and here you go - a fully DIY video that cost me nothing but time. I guess you could suggest that "you get what you pay for", but what the hell - it was fun, it's personal, and for better or worse it's me. So here it is - "Top Ten Lows." - RM

May 5th, 2015: A new album "Play Pause Stop" has arrived. Cases and cases of CDs are now here, just waiting to be purchased! An album never sounds quite as good as it does when it has been professionally manufactured, and this one is sounding pretty damn good. 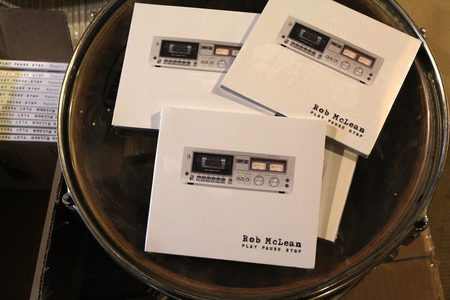 March 27th, 2015: My new album, which will be called Play Pause Stop, just went to Phil Demetro for mastering at Toronto's Lacquer Channel. Artwork is almost complete, and CDs will be getting manufactured in a few weeks. The tentative release date is May 1st, with the first CD release show (my first solo live show in over a decade) later in May.

Nov 25/14: This is "Christmastide", a contribution I made to "Rhymes with Elf", an album of holiday tunes from Guelph musicians.

Oct 25/2014: A brand-new tune is appearing on "Rhymes with Elf", a compilation of holiday tunes by Guelph bands and musicians. Proceeds from album sales will be split between the Guelph Youth Music Centre and Ed Video Media Arts Centre.